Bull elk are shy animals that can be very difficult to hunt. But with the right knowledge, even a beginner hunter can stand a good chance of bringing down a massive bull elk.

In this article, we’re going to give you a basic overview of elks and their behavior, then we’re going to share five expert strategies to help you take down a big bull.

A Brief Primer On Bull Elks

The first thing you need to know about bull elks is their size. Your average bull elk can stand at 1.5 meters (5 feet) tall and weigh over 600 lbs. The very largest of them are just a few pounds shy of 1,000, and can easily tower over anyone at 2.7 meters (9 feet) tall, including their antlers. 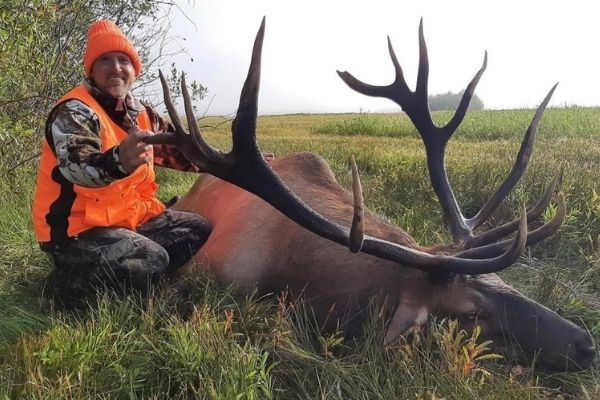 Bull elks are secretive and shy – if it’s not mating season, the chances of spotting one are slim. They’re also very intelligent and will avoid areas where they know hunters gather.

Finally, bull elks prefer running to fighting when faced with a threat; which means it’s much more work for you to track them down. If you’re following a bull, expect a long and hard journey ahead of you.

Where Can I Find Elks?

Bull elks love wooded areas close to bodies of water, surrounded by plentiful foliage for grazing. Since they often follow female elks (called cows) during the mating season, elks can range over a wide area which makes tracking them more difficult.

Most species of elk live in damp and marshy habitats. Some of the best places to hunt bulls include the Rocky Mountain region, Etolin and Afognak Islands in Alaska, and the Appalachian region.

When Should I Go Hunting?

Elks are nocturnal, so you’re more likely to catch a bull early in the morning or late in the afternoon. If you want to hunt bulls, you will have to get used to being a morning person. Elks are very stealthy, and you can easily lose sight of one if you start late in the day!

It’s possible to hunt bulls during midday, though you need to be thorough in tracking them to get a clean shot. Bulls typically rest in hard-to-reach areas during this time, so don’t expect to stumble across one even if you’re looking for it. Only the most skilled trackers should try to catch bulls during midday.

One last thing to remember: Always check the legal hunting times before going out to hunt, since penalties can be very harsh if you’re caught hunting outside the approved hours.

The Five Strategies You Should Use When Hunting Bull Elk

So now you’ve got those basics out of the way, what are the things you should do when you’re out there, rifle in hand and a bull in your sights? Here are some tips straight from veteran bull hunters: 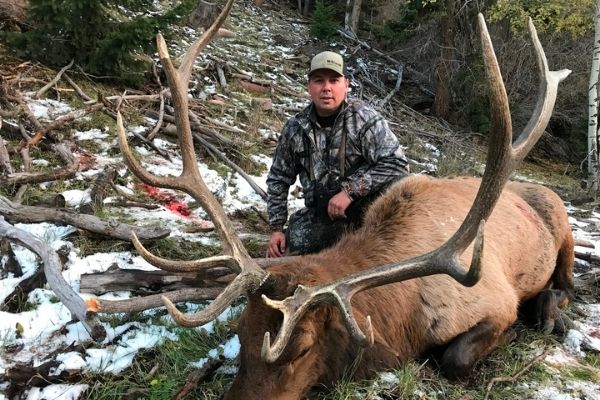 1. Camouflage Yourself With The Environment

As herbivores, elks have very keen senses. An elk’s eyesight, smell, and hearing are very sensitive. If you’re hunting bulls, you need to make sure that you see them before they sense you!

Proper clothing is a must, and not just because of the usual cold climate elk live in. Your hunting gear should blend in with the foliage of the area, so you can come up close to a bull without being spotted. While their eyesight is good, they often dismiss well-camouflaged hunters fairly easily.

Being quiet is also important. Thankfully, Elks often roam in areas with plenty of ambient noise. They’ll react to any unexpected or sudden sounds, but they tend to tune out noise like humans in crowded places.

What’s the trickiest to get around is their sense of smell. An elk can smell anything from 100 yards to 1 mile depending on their surroundings. If you’ve been tracking it for a while, they can and WILL smell you coming. Getting yourself an odor blocker or spray can keep you scent-free and nearly invisible to any bull elk.

2. Use Bugles And Cow Calls

Bull elks use a variety of calls or bugles to navigate their surroundings and communicate with other elks. Understanding which one to use is key to getting a bull’s attention.

One key thing to remember is that every bull’s bugle is different, like how human voices differ from each other. Some bugles that work for one bull may not work for the next. It can even have the opposite effect based on the specific bull.

Veteran hunters advise that you bugle cautiously. Cow calls attract a bull’s curiosity, but bugling calls their attention. Bugling with a bull is a matter of trial-and-error, and most of the time you’ll only get one chance to get it right.

If in doubt, don’t use the bugle! Older bulls have learned to tell apart the sound of a hunter’s bugle from a real one, so using your bugle too much can backfire.

If that doesn’t work, switch to cow or calf calls. Cow calls work better for cautious bulls since they’re less likely to spook and run away if they think they’re dealing with a female. Carrying both with you at all times is the best way to make sure you can attract your bull’s attention when you need to.

If you’re focused on finding bulls, then general knowledge of elk’s feeding habits, grazing areas, their reaction to their environment, and sleeping patterns are enough. Elks are fairly predictable creatures to track once you understand the layout of their area.

But isolating a bull long enough to get a killing shot is different. If you want to increase your chances of hunting a big bull, here are three things that you should look out for:

Aggressiveness will determine how you lure the bull to you. If you find that your bugle isn’t working, switch to cow calls to calm it down and make their guard drop. But if they aren’t responding to cow calls, bugling a challenge may be enough to get their attention, especially during the rutting season.

Pay attention to how much noise the bull is making. If you’ve been calling a bull over and it abruptly falls silent, don’t panic and think that it’s spotted you. Most of the time, a quiet bull is a sneaking bull – he’s about to pounce on you, so you better be ready. If he’s being very vocal but not moving, mix up your bugle and calls.

Finally, bulls will react to calls or bugles differently depending on their age. Younger bulls are more receptive to cow calls since they’ll often avoid fighting with mature bulls. Bugling will spook younger bulls but may attract the attention of mature ones since they’ll take it as a sign that another bull challenges them.

Each bull behaves differently, so you should take your time tracking and observing your target. Don’t expect to stroll into the woods and down a bull before dinner: a hunt can take days, especially if you’re hunting a mature bull.

The best time to hunt bull elk would be during the mating (rutting) season, since the biggest bulls are more active during this time.

Bulls in the rut are more receptive to cow calls and bugles, but that also makes hunting them more dangerous than usual. If you aren’t careful, you can spook the bull away for good – or enrage it enough to charge at you.

If you’re hunting during the rutting season, the best thing for you to do is to get a good idea of the layout of your hunting area. It’s less about finding bulls, and more about grabbing their attention away from cows in heat. That means knowing where they graze, where they sleep, and where they settle down with their herd.

Good places to monitor include:

During rutting season it’s best to follow the females, because that’s who the bulls are looking for. If you find a cow in heat on its own, just stick around and the bulls will show up.

5. Get Close, But Not Too Close

Elk hunters should expect to get up close and personal with their prey. There’s a fair bit of skill involved with this aspect, but also a little bit of luck, depending on the bull.

Despite their size, bulls can move quickly and quietly through woods and foliage. If you’re well-hidden, bulls can walk next to the spot you’re hiding without you realizing it. In these situations, it’s important to not lose your cool. Spooking a bull nearby can cause it to flee, and you have no guarantee that it’ll return to its habits once you’ve driven it away.

On average, your safest minimum distance is around 500 yards, enough for most calibers of bullets to down these big animals in one or two shots. If you know your gun well, then you can stretch it out even further. But the more distance you leave between you and the bull, the greater the chances of it escaping if you spook it.

A good way to tilt the scales in your favor is to have a guide or a spotter with you. Not only are they a second set of eyes you can rely on to spot bulls, but they know the area far better than you. Thoroughly vetting your guide before hiring them can help you secure the biggest bull with the least amount of hassle.

While these five tips aren’t the be-all-end-all of bull hunting, they are some of the best tips to get any novice hunter started on their journey. If you’re a little more advanced, feel free to deviate or adjust these strategies depending on the bull that you’re tracking.

Novice hunters will greatly increase their chances of downing a big bull once they understand how it thinks. Hunting bulls can be an extremely rewarding experience if you do it right, and the tips that we’ve given above can go a long way towards a successful hunt!