The Hornady’s ELD-X Long Range Bullet is one of the most innovative ammunitions ever made! It promises that it can take down big game at 1000 yards or more, but does it live up to expectations?

How The ELD-X Works

The ELD-X is a marvel of modern ballistics, combining design, stopping power, and versatility in one package. Here’s how it solves the three biggest problems presented by long-range shooting:
Accuracy 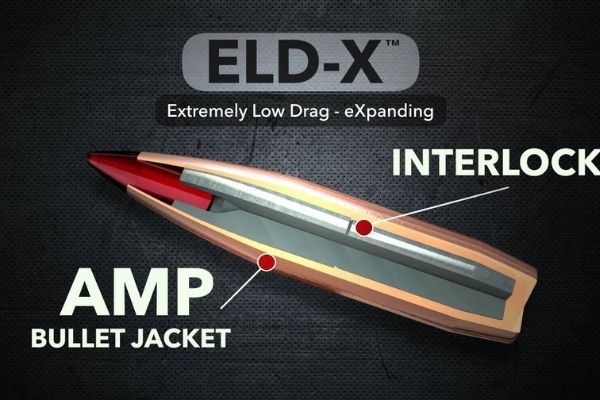 While it may not seem obvious, gravity can pull down bullets that travel at longer distances, affecting their accuracy at long range. The common solution is to pack more kick (or powder) into the gun to increase the distance traveled, but that means giving up some accuracy.

ELD-X bullets have some of the best ballistic coefficients, which means it can travel interminable distances without losing power, which ultimately gives you more accurate shots. The bullet performs well with a QC standard of 200 yards at half-MOA, which is equal to most match bullets available today.

Because the design of the ELD-X works well for different calibers, it also guarantees that any hunter can use almost any rifle with ELD-X bullets.

Most long-range caliber bullets perform well at around 200-300 yards, with some being able to push the envelope at around 500-600 with the right rifle. Any further than that, and the bullet’s own weight and air resistance will pull it down.

The Hornady ELD-X avoids this by having an aerodynamic casing that streamlines airflow and reduces drag, allowing it to travel where you intend it to land. Most hunters report favorable performances at around 1000 yards or more when paired with a quality rifle.

The ELD-X mushrooms and expands perfectly upon impact. This ‘mushrooming’ can blow a fist-sized hole into any large game at 2,300 fps – and that’s not even accounting for the ELD-X’s ability to shoot consistently in tiny groups. Together it’s a lethal combination that most bullets could never achieve.

But while it is a ground-breaking piece of ammunition, the ELD-X fills a specific niche in shooting. If you’re a hunter looking into getting yourself ELD-X bullets, there are two practical applications that you need to consider:

ELD-X bullets don’t mix well with large game like grizzlies, which most hunters shoot from distances of 300-500 yards. Shooting an ELD-X at that range doesn’t guarantee that it’ll kill big animals, since the expanding action doesn’t deploy well when you fire it that close.
Most hunters would advise you to use penetrating instead of expanding rounds when hunting big game animals for a cleaner kill shot.

Bigger animals like bison have an enormous body mass and thick bones that can minimize the effect of an ELD-X impact, even if you fire it at maximum range. The bigger the animal, the more likely it is to shrug off the effects of an expanding bullet.

It’s advised that you use higher caliber bullets like magnum rounds when hunting big game to make sure the bullet hits the animal’s vital points.

Some bullets work better depending on the terrain and environment. If you can get a broadside shot on a deer in a dry grassy area where it’s easy to track, you can use an ELD-X since it’s not a large or dangerous target. In this specific case, an ELD-X that splashes on impact won’t affect your hunting methods too much.

But what if you’re tracking something in rainy or coastal conditions? Then a penetrating bullet would work better, since the blood leak from hitting vital points will make the animal easier to track in the rain.

The Hornady ELD-X is a great choice for hunters looking to hit light targets at around 900-1500 yards and is remarkably versatile for a long-range bullet. If you’re confident in your rifle and want to try long-distance shooting, the ELD-X is an excellent choice.
With that said, this bullet isn’t effective for taking down large animals. If you want something that can reliably take down larger animals, you’re better off using penetrating ammunition.