Every season has its advantages and disadvantages. Hunting in winter is no exception. You may be asking yourself: “Is hunting in winter for me?” This blog post will answer all of your questions about hunting during the colder months, including what animals you can hunt, why it’s a good idea to track during this time of year, what gear you’ll need, how dangerous or easy it is to hunt during the winter months, and more!

What Game Can You Hunt In Winter?

Hunting in winter has been known to be one of the more challenging seasons to hunt in. With that said, it doesn’t mean that you can bag some excellent game, including deer, elk, and wild boar! These are some of the animals that you can hunt in the winter months. 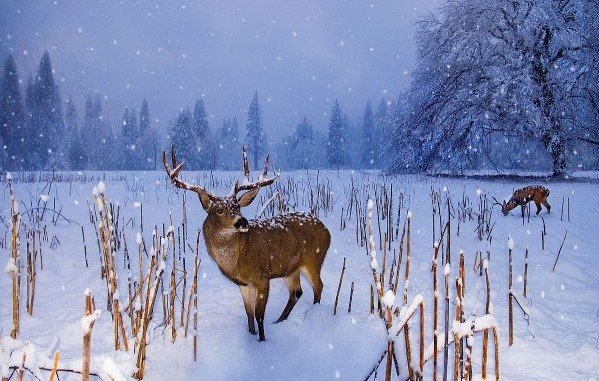 How is deer hunting different in winter vs. other seasons, you might ask? Deer has various habitats that are affected by the weather, and hunting during winter is no different. The deer will move to lower ground, such as brushy areas next to agricultural fields or wooded swamps that freeze over in the winter.During this time, there’s also more snow on the ground, so it can be harder for them to see and smell hunters in the area. This can be one of the most significant benefits for hunting deer in the winter season.

Elk can be hunted in the winter season with little effort. They’re a large herd animal, so they don’t usually migrate and can be found in the exact location year-round.Winter is seen as their mating season, with bulls chasing cows to find mates, making them more aggressive than during other seasons of the year. This also makes it harder for hunters to get close enough without being noticed. Elk are intelligent large animals. Due to winter being mating season, they hunt Elk a little bit more on the dangerous side during this season. They have been known to challenge hunters during this season, but that doesn’t mean that it’s impossible to bag an elk during wintertime.

Wild boar can be hunted in winter. They are a great game animal to hunt in the winter because they depend on artificial food sources and can be found near their feeding grounds during this time of year. This makes it easy for hunters to find them without too much effort.Wild boar can’t handle below-freezing temperatures very well, so hunting or sightseeing is best done at a distance. They have known to be more aggressive during this season.

Is Hunting In Winter Dangerous?

What Gear Is Needed For A Winter Hunt?

Some of the gear needed for winter hunting includes good quality winter gloves, water protective boots, and warm and windproof clothing. Lots of layers are recommended while out on a winter hunt.

Gear Needed At Your Campsite When Hunting In Winter Season?

First and foremost, make sure that you have a waterproof tent, a sleeping bag rated for below-freezing temperatures. You might also want to consider a small tent heater to assist through the cold weather drop in the early AM’s in the woods. Secondly, we would recommend waterproof clothing as much as possible. It’s one thing to be cold, but to be out and wet can not only be extremely uncomfortable but can also be dangerous.

Is It Harder To Hunt In Winter Than Other Seasons?

In some areas, winter can be the best time for hunting. Animals are plentiful and readily available as they search for food to store over the colder months ahead. But it’s also true that animals have a more challenging time finding natural food sources during this season, making them more aggressive by nature.

Can Beginners Hunt In Winter?

Beginners can hunt in winter just like in any other season. It is essential to know what elements you will be up against and how you can enjoy your time while still staying safe in the wet and cold weather.

What Can You Catch When Hunting In Winter?

Winter is an excellent season for hunting moose and deer. Just be prepared to have your hands complete with the abundant animal population, as well as having all of the gear you need to get it back home safely. It’s one thing to take down a large game animal successfully, but it requires a good amount of work to field dress and get the animal back home. Doing this in unfavored wet, cold, and snowy conditions can make this task next to impossible without the help of other hunting hands, but it’s not impossible!

One of the most essential items to have on hand while hunting winter games is a good, warm coat. You’ll be outside for hours at a time without much protection from the elements, and even if you’re not in it as often, your truck will still act as a safe haven during extreme weather conditions.

Another thing to have in your hunting arsenal is a good pair of gloves that will keep you warm while handling the game. Some hunters prefer to use surgical or latex gloves, which are better for more delicate skin and hands than other options.

Winter hunting can be an enriching experience. The best time for hunting is usually December to March, during the winter season. Beginners can enjoy a successful hunt in this time as well. Winter months are good because animals have fewer places to hide, and you don’t need much gear or equipment that you would with other seasons. Stay safe, be prepared, and have fun!