It should go without saying: under no circumstances should anybody be using a firearm (let alone a firearm equipped with a scope!) unless they have a firm understanding of how to use guns, how they work and most importantly, what safety precautions they should be carrying out each time they use one.

Whether you are a hunting old-timer or you’re just getting started in the world of firearms, it’s always important to brush up on your gun knowledge. For this reason, we have spent some time creating this helpful article to educate you as much as possible about this subject. We’re going to be covering all the key features of a firearm, as well as touching on what each component does.

The first component we’re going to be covering is what is known as the ‘action’, which is basically the act of carrying out the shot. In general, it is used to refer to the central part of all types of guns includings pistols, shotguns and even rifles.

If you ever get stuck, just remember: the action is classed as when you load, fire and eject the ammo (shells or cartridges).

Next up is the ‘butt’. To simplify, on a gun such as a rifle or shotgun, the butt can be found at the end of the gun and is the part which you place your shoulder against while firing the gun.

It’s just the end bit of the shoulder stock, (otherwise known as the larger, triangular piece of wood at that end of a longer gun). Wondering about smaller firearms? Technically speaking, pistols can have butts, but it’s positioned at a much smaller area at the bottom of the grip, so it won’t be able to absorb too much energy from the shot.

On the other hand, longer guns will be able to absorb some of the shock of the blast while serving as a brace for your arm.

This brings us onto the stock. Usually found on larger guns like rifles, shotguns and even wooden guns, this is the back part of a gun that provides structural support.

It essentially provides a means for the shooter to be able to firmly hold the gun and effortlessly aim with stability by pressing itself against the shooter’s shoulder, helping to prevent muzzle rise (the gun rising upwards after being shot) by working to transmit recoil straight into the shooter’s body.

As a side note, the stock is also a decorative area of a gun and is the part where you will be able to see the grain of the wood on classic guns (shotguns/rifles) or where novel decorations will be on small guns such as pistols.

We’re sure you already know this one! To be on the safe side, the barrel is basically the area which the bullet travels down on its way from the firing chamber, all the way to the muzzle. 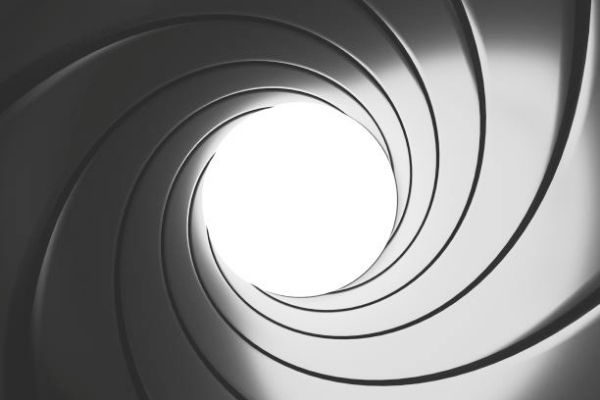 The barrel also contains the part of a gun referred to as the bore, which is a term that refers to the channel that the bullet travels through before being released towards the intended target.

The trigger is a really important part of a gun and is the lever which you pull (or trigger) with your finger to fire the gun. The trigger is the part of the gun which controls the firing mechanism. When you pull the trigger, it sets off a chain of actions which result in the bullet coming out the muzzle and leaving the firearm to shoot the intended target.

The hammer ties closely in with the hammer! When you pull the trigger, a spring instantly forces the hammer to rotate, hitting the primer of the cartridge and causing the powder to ignite and then fire the bullet out of the gun.

However, on single-shot revolvers (you know the type that cowboys use in western movies?), you’ll have to manually cock the hammer back before pulling the trigger in order to activate it. Nowadays, pretty much all hammers are set to cock automatically and then release when you pull the trigger, in one effortless motion.

Carefully designed in order to prevent any accidental firing, the trigger guard is the part of the gun which makes a circle around the trigger level. It’s usually a circular piece of metal.

The safety is essentially a mechanism used to help prevent any accidental firing of a gun and it isn’t always the same on each gun. For example, on one gun it might be a button, while on another it could be a sliding mechanism. For this reason, it’s important to read your firearm manual in order to detect where the safety is on your particular gun.

Generally speaking, it should be located next to the trigger area of your firearm and will essentially block the trigger mechanism.

The muzzle is the front end of a barrel from which the bullet will exit. It is the last point of contact between the barrel and the bullet.

The breech is the part of the gun where you load ammunition! It’s located at the back part of the firearm. Though some guns have the breech located in the muzzle, breech-loaded guns are much safer to load, which is the reason why many modern manufacturers locate it from the breech end.

the chamber is a section of the barrel (usually behind the breech) where the actual cartridge is stored for firing.

In firearms, the cylinder is essentially the rotating part of a revolver that contains multiple chambers. When firing the gun, the cylinder revolves around a central axis in the revolver to bring each chamber into alignment with the barrel, ready to be fired! 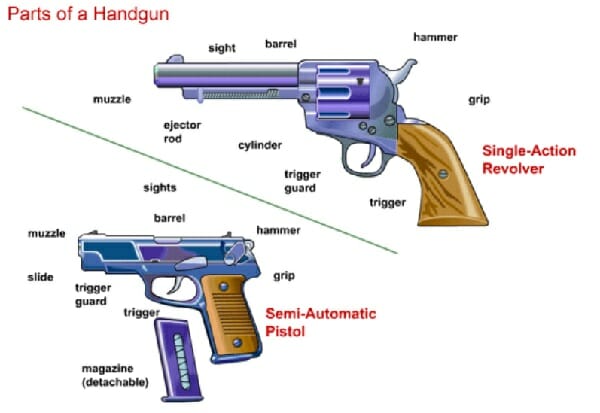 This is a type of ammunition storage attached to a repeating firearm which holds cartridges. They fit into the breech of the gun and are usually able to be removed.

A bolt is the part of a breech-loading firearm that blocks the rear opening of the barrel chamber, moving back and forwards in order to allow the loading and unloading of cartridges from the magazine.

This is a device on a firearm which, when used, results in the hammer being moved into the ‘ready to fire’ position.

A sight in a gun is a feature that is used to assist in visually aligning your weapon with the target. This is a good option for shot range targets.

This brings us onto scopes! Any rifle being used at a distance that reaches beyond 50 yards should have a scope and if you’re already a hunter, you’ll know the importance of having a good scope in your hunting arsenal.

A scope is a magnifying eyepiece that will provide you with a clear view of your target while at a distance from it. However, it’s unlikely that your rifle is going to come with a scope, so you’ll have to scope (get it?) the market in order to find one that’s going to suit both you and your firearm.

Before using a firearm, always remember these points: